To help people who have lost a limb due to accident, military service, or disease, replacing that limb with something as serviceable as possible is the ultimate goal of prosthetic researchers. For the amputee, a functioning bionic limb is perhaps the “Holy Grail” of limb replacement.

This week, we will revisit the subject of bionic prosthetics in order to introduce more recent technological advancements in neurobionic technology that could make artificial limbs a much more functional replacement than the old “hook” or “peg leg” (arrgh!). 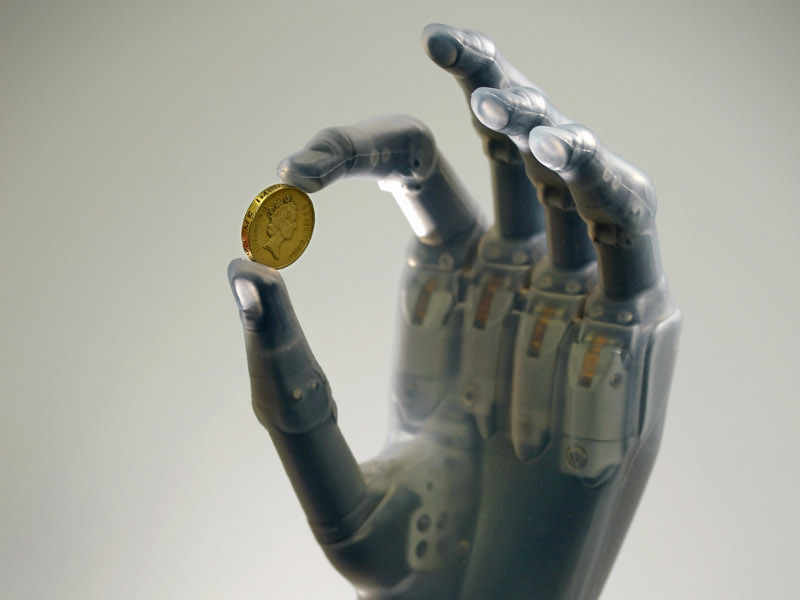 When we talk about prosthetics as it relates to rehabilitation, it is important to understand the concept of tactile sensory feedback or haptics. For most people, this means that they can feel what they touch, which gives the brain information about gripping objects, for example. For the amputee, this lack of haptic feedback presents the unique problem of not being able to feel what they touch with the prosthetic, so they must often rely on visual feedback instead. Having to simply watch their prosthetic hand constantly creates a tremendous cognitive load on the user’s senses.

It should be noted that there are a number of other types of indirect feedback that the amputee can respond to. This would include: sensing pressure changes and motor vibrations on the remainder of the limb, the sound of prosthetic motors, and the cognitive correlation of grip force with the closing velocity of the prosthetic gripping mechanism.

Since the 1980s researchers have focused their investigations on external devices to achieve closed-loop prosthetic control with sensation modality matching (touch, pressure, shear, and temperature). The resulting devices include Dr. Patrick Patterson’s pressure cuff system that applied pressure to the arm in proportion to pressure on the prosthetic hand and Dr. Sanford Meek’s motor-driven pusher to apply a perpendicular force to the user's skin in proportion to the force at the prosthetic hand. However; regaining some measure of haptic feedback to reduce cognitive demand is the goal of prosthetic researchers at the University of Pittsburgh.

Operating on test subject, Nathan Copeland, who was paralyzed from the upper chest down in a car accident in 2004, Pitt researchers implanted a microelectrode array in Copeland’s brain region involved in touch perception, the somatosensory cortex. The researchers then connected electrodes to a smart prosthetic arm and delivered mild electrical currents, called microstimulation to the electrodes to test the system. At first, the patient felt no response, but after about a month, the microstimulation produced results. Copeland experienced a natural touch sensation in response to stimulation of his sensory cortex. After this breakthrough, the sensory feelings continued for the duration of the six-month study.

Study coauthor Robert Gaunt of the University of Pittsburgh said in an official release, “The ultimate goal is to create a system which moves and feels just like a natural arm would. “We have a long way to go to get there, but this is a great start.”

Next week, we will continue this series with cutting-edge breakthroughs in neuroprosthetics, a technology that brings us one step closer to the truly bionic limb.

In the meantime; if you are in need of prosthetic or orthotic rehabilitation, don’t wait for your family physician; visit Excel Rehabilitation Services on Burnside Ave. in Gonzales, Louisiana. You will receive one-on-one professional care from an experienced physical therapist!